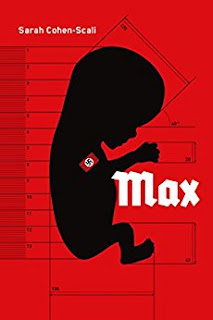 This is a very interesting historical fiction book set in Nazi Germany.  The Lebensborn Program is going strong and women are selected by their Aryan features and linage, to reproduce.  The babies are taken away from their mothers soon after birth and raised basically by the Nazi party, Max often says his mother is Germany and his father is the Fuhrer.  You first meet Max before he is born, because he doesn't want to be born yet, it is only April 19th, he wants to be the first to be born on April 20th, so he and the Fuhrer can have the same birthday, he makes it.  As Max grows older he becomes for the most part, the poster child for the Nazi party, but not everything goes exactly as planned.  This book was a bit slow in the beginning but than it exploded as Max did with growth.  The story and the historical information starts moving at warp speed and wow, what a book  it is.