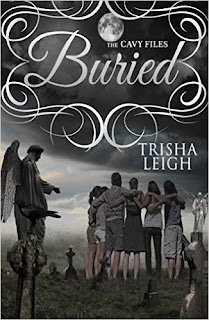 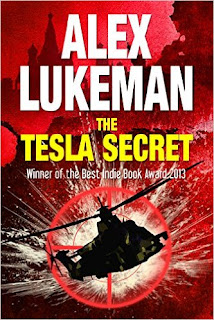 I am in love with these audiobooks! Jack de Golia is a awesome narrator and has made me feel like part of the Project team, so I have to keep listening to see what the next mission is, don't I?
The missions are always exciting, suspenseful, full of action, and with tons of rear end kicking, and somehow de Golia keeps his enthusiasm up during the whole thing.  I also love the way he portrays each character, it is easy to tell them apart even from the start.
This book pits the American team against their Russian friend and some of his counterparts when they are to work together in Russia on a case, only to find out that their objectives are very different, who will win out?  Where is Selena? Heck where is Burps? 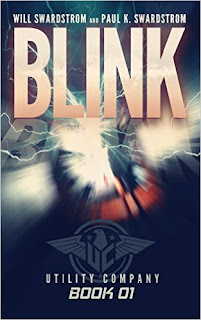 Blink is a awesome book with a certain amount of creep factor, but tons of action and suspense.  It would really strange to be looking at your reflection in the mirror one day only to see yourself wink back at you, than your whole world and how you perception of everything in it would change in a blink of a eye.  Exactly what government agency do you call to help you with this weird stuff?  Well, the utility company of course, hey don't they get all the strange stuff anyways.
This is a great book you won't want to miss, it is like when you know you should go to bed but you just want to read one more chapter than just one more, than another and another, than the book is done and it is way past your bedtime, except during this book you probably won't want to go to the bathroom.
5 STARS﻿ 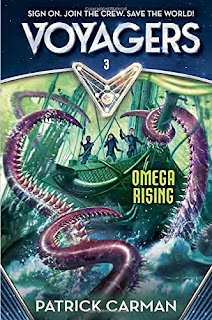 The Alpha team is now on the Aqua-gen world, where they need to be careful of the sea monsters and pirates to collect the 3rd element and save earth. Dash, Gabriel, and Carly are searching for the pollen slither while Piper pilots the Cloud Cat above for element testing and extraction.  But the Omega's show up and put a wrench into everything, again.  Can Dash, Gabriel, and Carly save themselves and their new friends, from the pirates and sea monsters?  Who will get the element first?  Does everyone make it off of the planet? And, where is Chris?
This is another fast paced, suspenseful, awesome book in the series of 6. These books are wonderful with short, meaningful chapters that will appeal to all readers even the most reluctant will fall for the non-stop action and predicaments these kids find themselves in and have to find their way out of.  There are three books to go and you don't want to miss out, so get going before the next one comes out on March 1st, titled Voyagers 4: Infinity Riders. Also, don't forget the awesome games to see if you are a Alpha at VoyagersHQ.com

Posted by Trishap at 5:52 PM No comments:

While trying to save her brother from a witch’s fire four years ago, Greta was thrown in herself, falling through a portal to Mylena, a dangerous world where humans are the enemy and every ogre, ghoul, and goblin has a dark side that comes out with the eclipse. To survive, Greta has hidden her humanity and taken the job of bounty hunter—and she’s good at what she does. So good, she’s caught the attention of Mylena’s young goblin king, the darkly enticing Isaac, who invades her dreams and undermines her will to escape. But Greta’s not the only one looking to get out of Mylena. An ancient evil knows she’s the key to opening the portal, and with the next eclipse mere days away, every bloodthirsty creature in the realm is after her—including Isaac. If Greta fails, she and the lost boys of Mylena will die. If she succeeds, no world will be safe from what follows her back…

Once upon a dark time… Greta the human bounty hunter never quite fit into the shadowed, icy world of Mylena. Yet she’s managed to defeat the demon Agramon and win the love of the darkly intense Goblin King, Isaac. Now Isaac wants her to rule by his side—a human queen. And the very announcement is enough to incite rebellion… To make matters worse, defeating Agramon left Greta tainted with a dark magick. Its unclean power threatens to destroy her and everything she loves. With the Goblin King’s life and the very peace of Mylena at stake, Greta must find a cure and fast. Her only hope lies with the strange, elusive faeries in the Glass Kingdom…if she can get there before the evil within her destroys everything.

After spending the last four years trapped in a place of monsters, demons, and magick, the last thing the fierce teenage bounty hunter Greta expected was to ever be back on Earth. But a rare opportunity gives her and the Goblin King Isaac the opportunity to do just that. Now she’s home. With a boy in tow. And her parents have lots of questions. Although Greta finally has her heart’s deepest wish—to see her family again—every step she takes to reconnect with them drives her further away from Isaac. Greta and Isaac planned for her to return to Mylena and become his queen, but she’s not sure if she can go back to that harsh world, though staying on Earth means giving up the boy she loves. But a powerful enemy refuses to let Greta escape. A demon who will stop at nothing to destroy her and everything she loves. Even if it means following her to Earth and forcing her to face a fate as unavoidable as love itself.

About the Author:  Chloe Jacobs is a native of nowhere and everywhere, having jumped around to practically every Province of Canada before finally settling in Ontario where she has now been living for a respectable number of years. Her husband and son are the two best people in the entire world, but they also make her wish she’d at least gotten a female cat. No such luck. And although the day job keeps her busy, she carves out as much time as possible to write. Bringing new characters to life and finding out what makes them tick and how badly she can make them suffer is one of her greatest pleasures, almost better than chocolate and fuzzy pink bunny slippers.

Read below for an excerpt from Greta and the Lost Army:


The streetlamps cast soft cones of light on the sidewalks all the way through the neighborhood. Greta pointed things out as she remembered them. “That’s where my friend Danielle used to live. I guess she probably still lives there.” “Are you looking forward to seeing her again?” She nodded. “And if I remember correctly, she’s more hyper than a Mylean berserker—only less ripping and tearing, and more frenzied hugging and constant talking.” The rumble of his amused chuckle made her grin. He squeezed her hand. She looked up at him, and it hit her. “You know, this is kind of like a date,” she said, tingles of awareness dancing up her spine. His smile was crooked, and his eyes warm as he laid his arm across her shoulders, making her feel like he would rather be here with her right now than anywhere else. It probably wasn’t true. They were both too worried about Mylena for it to ever leave their minds completely, but maybe one day it would be true. “What would be the purpose of a date?” There was such a thing as courtship in Mylena, but she and Isaac had pretty much bypassed anything resembling normal…in both worlds. What if she was wrong and the portal didn’t open again? What if they stayed here? There could be more nights just like this, and eventually maybe they would get a place of their own and… “You know, so a couple can get to know one another and decide if they like each other.” “But we already know we like each other.” When they were alone like this and his voice softened because he trusted her enough to let down his guard, it did crazy things to her. Like popping candy hitting her bloodstream. “Even more important, we know that we fit together. In battle together, or planning for Mylena’s future, even while arguing…and definitely when I kiss you…nobody fits me like you do.”

The Giveaway: Winner’s choice of $5 Amazon Gift Card or a print or eBook copy of Greta and the Goblin King or Greta and the Glass Kingdom. As well as notebook, a pen with the words "Dream bigger darling," and Hammond's candy. a Rafflecopter giveaway
Posted by Trishap at 5:00 AM 2 comments: 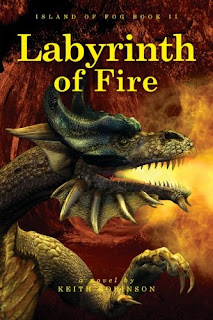 Hal and his friends are safe in Miss Simone's world and trying to find their bearings, but Miss Simone already has work for them.  While Dewey might feel torn between his human and centaur sides on his mission, and Lauren having to deal with baby stealing harpies might test her greatly.  It is Hal that has the most  dangerous mission, he must enter the dragons lair.
I really enjoyed this book the action and suspense of the missions the children must undertake, of course with their friends by their sides.  But watching each of the children grow as people, creatures, and as friends, all of them.  This book is well written and fast paced and should keep the attention of even the most reluctant of readers.  I had the audio version of this book where narrator Fred Wolinsky really gives it his all, his gives this book a life of its own, he makes you feel as if you are there and part of the team.  He is a awesome narrator and I can't wait to find more of his works.