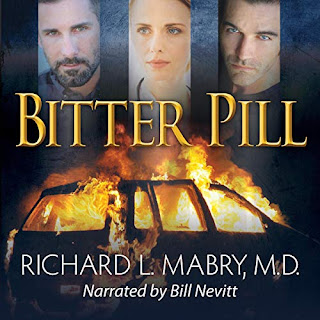 Three very different people, a doctor who is getting tired of her family practice, a priest who used to be a doctor but is trying to amend for what he thinks are his sins, and a man of the cloth that is tired and ready for a younger person to take over.  Three different tired people, that all end up in one place, their faith.  Three people that need to take the bitter pill and get on with it.
This book was set up well and is very interesting, you won't want to put it  down.  The character development was awesome, you really get to know all the characters as if you are their best friends, the one they tell all their secrets too.  If you are lucky enough to get the audio version narrated by Bill Nevitt than you really will get lost in the story as he has a way of transforming you to that place and time to live with these characters, it is truly amazing.  Which ever format you choose you won't go wrong with this book.
Posted by Trishap at 1:00 AM No comments: 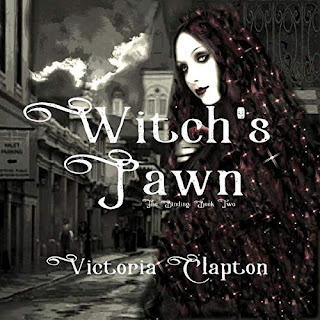 Sybella Rose is settling into her position of Queen of New Orleans, even though Demien isn't around much so he has appointed her a vampire like advisor, along with her friends, a ghost and a cat.  But now she is after information about herself that is hard to come by, is she fea?  If she is that might help dealing with the fairies that are trying to destroy New Orleans.  But her father is no help so with friends old and new the hunt is on.
A perfect sequel to The Binding as it picks up right when Sybella and Demien come back from their trip, and now need to settle into their new lives.  The action is non stop and there is suspense galore, but the best is being back in New Orleans, the food, the stores, everything, it makes me homesick to go back but my New Orleans is a older city.  The narration by Teresa Booth will keep you up way past your bedtime as it is so engaging.  What ever platform you choose I think you will love this book and if you are like me you can't wait for more.
Posted by Trishap at 6:58 AM No comments:

Take Me With You (YA) 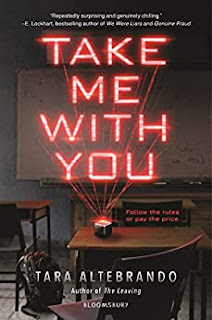 Take Me With You is a thrilling book about four teens from four totally different backgrounds brought together by a odd message to meet in the band room after school to meet with the band teacher.  That is when the fun begins, the band teacher was not there but there was a funny little black box on the teachers desk and when they go to leave the box asks to be taken with them or else.  No one knew what or else was than the fire alarm goes off and the box demands to be taken with them so they do and the teens lives will never be the same again.
This book started a bit slow to ease you into the characters, but than it speeds up very quickly and hooks you in with all the psychological play.  The characters are well constructed and perfect for their parts.  It is a fast paced, suspenseful and intriguing book that will suck in every reader, reluctant and all ages.
Posted by Trishap at 1:00 AM No comments: 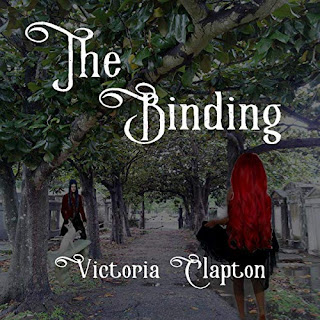 Sybella Rose has always had a odd connection to things.  But with not much money left after moving to the big easy to live a dream, she finds work in a great little gris gris store under her apt.  But she soon meets a dark figure, Deamian, Who she figures out pretty fast is a vampire, a very rude vampire.  Than she is plunged into the paranormal world that is New Orleans.
This is a awesome book it has action and a ton of suspense, but most of all flavor.  Ms. Clapton has woven this book together into a wonderful pot of gumbo tasting goodness.  I lived in NOLA for several years and this took me right back, I love the characters and their typical laissez les bon temps rouler attitude. The audio was pleasant enough and the different voices are interesting,  but I surely can't wait to hear more.

Posted by Trishap at 6:31 AM No comments:

The Predicament of Persians (ADULT) 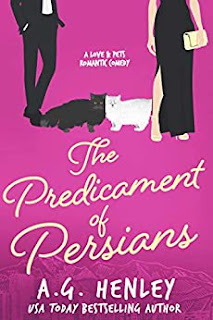 This as with all of the Love and Pets romantic comedy series is just a wonderful, sweet book, with just enough comedy to keep a smile on your face if you are not still laughing.Kathleen and her furbaby Juliet the Persian arrive at the catfest hoping to win  the newcomer award and seal a sponsorship with Purina, she just has to beat another Persian named Romeo, and his person, sworn enemy in the Instagram cat photos.   Not to mention their respective fans the Catulets and the Meowtagues.  The one thing Kathleen doesn't plan on is falling in love.
This really is a sweet book with lots of suspense and plenty of humor.  One of which keeps you waiting, reading and laughing.  I hope you all really enjoy this as much as I have.
Posted by Trishap at 1:00 AM No comments: 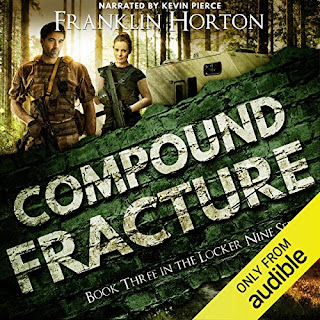 Grace is on her way home, but Robert decided to wait for a friend to heal before they left for his house.  Before they could leave the compound a politician with his private army found the compound and have decided to take it for their very own.  What they didn't count on was that this compound was not ordinary and stood their ground against them.
This is a great listen by the wonderful narrator Kevin Pierce, he can bring these stories to life in your head, where you can try and help the Hardwicks on their way.  Bringing all the authors action and deep suspense to life through his voice is truly a gift.  These books are so good I can't wait to see what happens next will everyone finally get where they want to be or make do somewhere else.
Posted by Trishap at 11:27 AM No comments: 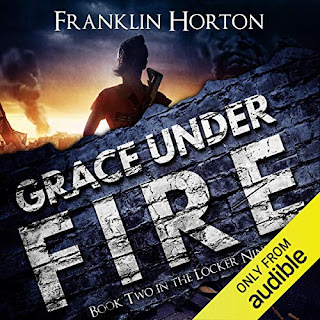 This book picks up right after book one, Locker Nine, ends.  Grace is at a compound and was trying to make her way home, she thinks all is OK now as her dad is with her, but she couldn't be more wrong.  Grace gets separated from her dad in a attack but she makes it home only to find more violence, and cruelness of people to take all of what others have. Could a child's misplaced words cost Grace and her family everything?
This, the second book of The Locker Nine series is just as powerful as the first, and makes you think during these times what could have happened, I mean some of the TV footage of the toilet paper debacle was bad enough, now think what could have happened as you read/listen to this suspenseful, action packed series.  The narrator of the audio version, Kevin Pierce, is just wonderful he is a narrator I look for now because he can make a story even more realistic.  Pierce can open this hateful but hopeful world for everybody to take part in.
Posted by Trishap at 1:00 AM No comments: 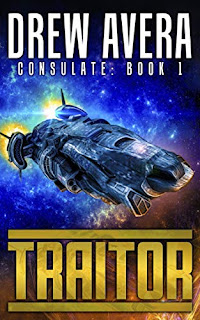 Commander Hoyt and his family are on the run,  although he is innocent of the treason charge.  Luck or not his pursuer is his friend.  But when his ship goes down he knows it is only time before his friend Dickson catches up so repairs are needed and fast.  Dickson isn't sure if Hoyt is really guilty of the charges as well but he can't help Hoyt and his family until he can talk to him and bring him back.
This was a awesome action packed, suspense filled book.  It held me captive until I was able to finish it, and left me waiting for more.  I fell in love with this family and their plight and found myself cheering them on, no one deserves to be persecuted for things they didn't do.  I would love to tall  you more but I don't do spoilers you have to find that out for yourselves.
Posted by Trishap at 8:27 AM No comments: 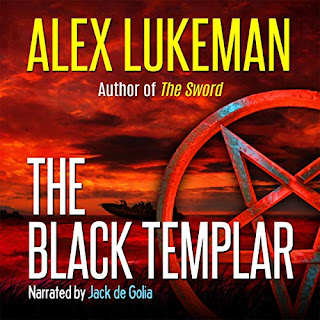 The Project has ended everybody has gone their own way, Selena and Nick have twins to keep them busy.  But when Selena is asked  to translate some old pages she realizes how much she misses the people and the work, So they decide to get the team together to do consulting work, the kind of work you don't get shot as doing.  But director Harker gives them a offer that is hard to turn down, but it could happen.
Full disclosure I have been sitting on this book for quite some time thinking it might be the last but I know now there are two more and I am so happy.  I have come to think of these people as family.  These books are so wonderful just the right amount of action and suspense to make a fiction book sound very real.  If you are lucky enough to get the audio narrated by the wonderful Jack de Golia than you might have thought you actually did go into  action with the team and help them like Freddy does.  Jack de Golia and Alex Lukeman make a awesome team and the audio is not to be missed but which ever format you prefer I think you will like this series, and might even learn a bit of history.
Posted by Trishap at 1:00 AM No comments:

The Parkour Club (YA) 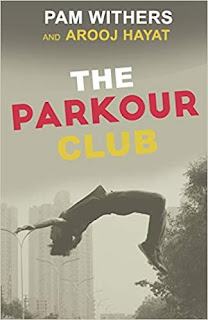 At the moment there are many things that Bronte, the teenage main character, doesn't like, especially that her dad's work is so dangerous and she perceives it as being more dangerous now that her mom has made them move back to the U.S. from Egypt.  But high on top of things she likes is parkour, and she is awesome at it, but when she starts seeing a middle eastern boy things become a bit dangerous for her and she doesn't even know it yet.
This was a great book with lots of diversity and we all #needdiversebooks.  It shows the prejudice against Muslims because people have not even tried to understand them and what they believe.  I hope this book shows others how to become more tolerant of other people like it did Dan.  This book also has tons of action, some suspense and a bit of who done it.  This was a good book and one that I hope goes far because we all need more of these kinds of books.
Posted by Trishap at 6:36 AM No comments: