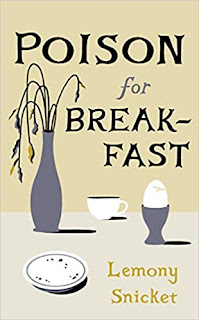 This is a book both like and unlike other Lemony Snicket books you might have read in the past.  It is philosophical but in a way I think most readers will be alright with.  As the title state he ate poison for breakfast and is now processing and understanding why one would do that and following the clues to who would do that to him and why.  Like I said not entirely the same but not entirely different either, but well worth a try, especially if you are a mystery junky like me. 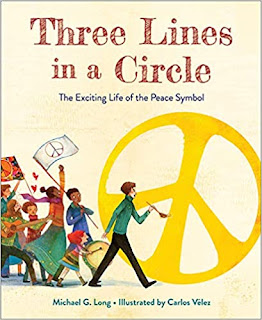 This is a wonderful book on the creation of the now known peace sign.  It has great pictures to help keep children engaged while listening to this story of how one graphic designer  in London made a sign that went international and is still known today. 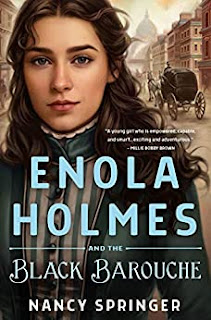 Enola Holmes, yes of those Holmes', Sherlock and Mycroft's sister is just as good as her brothers if girls only had a chance in these times.  But when Sherlock is indisposed Enola takes one of his cases right from under his nose, it will either bring him out of his funk or it won't and she will help this poor woman whom Enola has taken a liking to right away.

Thus case book of Enola's is a wonderful read for any mystery lovers and reluctant reader as there is tons of action and suspense all around.  The twists and turns are everywhere but don't be fooled, there is only one straight answer.  SO stay on target and see if you can answer all the questions before the end. 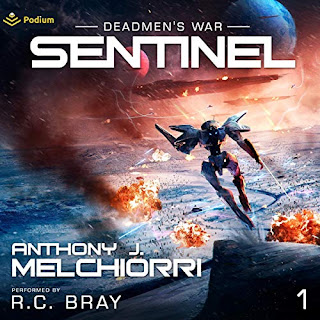 Cole and his squad (Banshee) are to protect some scientists on a frozen planet, but when they are almost wiped out they are given a new role, to jack into to Sentinels that were being studied by the scientist, in hopes they might be able to more protect the scientists.

This is a awesome audio narrated by the award winning R.C. Bray.  The book is full of action with a bit of suspense thrown in.  As cool as Cole is, my favorite character has to be the kick butt female operator named Tanaka.  She can do anything and do it well.  This book is very engaging and will grab you and not let go until you are finished and even than you will be clamoring for more, at least that is what happened to me.  This is my first book by Melchiorri but I will certainly be looking for more.

Posted by Trishap at 8:18 AM No comments:

After the End (ADULT AUDIO) 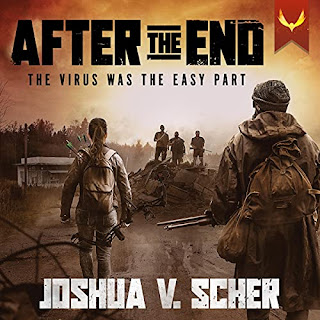 Being a prepper has really helped Addison but he has decided to leave where he is and seek out his Uncle Izzy, so the plan is to bike his way to his uncles with his bow, a gun or two and some food.  What he doesn't plan on is finding another survivor and not really know if the pregnant girl, Ava, is friend or foe but now she is going with him.  Will they find others, will they be friend or foe?

This book is non stop action and suspense.  The characters, I believe, are realistic for the situation and that might be hard sometimes to get the character where the author wants it to go while keeping it real.  I had the audio version and it was narrated by the wonderful Kevin Pierce.  Mr Pierce can make you feel like you are on the road with Addison cheering him on and trying to help him through the rough spots.  This is really a book for today but will be good for any day.

Reign of Blood (YA AUDIO) 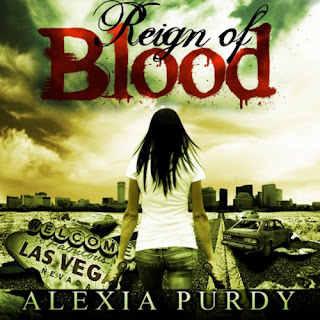 Somehow April, a 17 year old girl, is still alive after the epidemic swept through a year ago and now the vampire factions are fighting over her blood thinking it holds the key to their freedom.  April living in Las Vegas with her mother and brother has become quite the vampire hunter out of necessity, but once her family has been taken hostage things become, lets say intense.

I don't want to say to much for fear of spoilers, but this book only has one speed and that is fast.  It comes out of the shoots fast and doesn't ever let up even leading into the next book.  Plan to be up past you bedtime or if you are lucky enough to have the audio version narrated by Anne Marie Susan Silvey than plan to take the long way home from work or take some very long walks, as she makes this book so much more wonderful, if that is possible, by her voice.   Either version you choose you won't go wrong.

Rainbow in the Dark (YA) 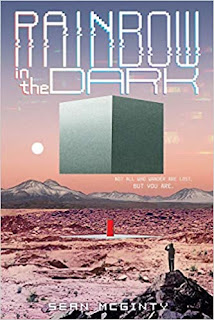 This is a story of a high school senior, Rainbow, a cat, Goldfish, and how Rainbow got stuck in another reality playing a game with three other teens that may or may not be real, especially when you find out how they have to use the bathroom.  They must complete quests, gain experience and memories to hopefully win and escape the game and go home.  But where does a cat named Goldfish come in and is Rainbows brother in this world too?

This is a very interesting and well sculpted book.  There are so many twists and turns it will keep you ensnared until the end.  The characters are well rounded and the story line is a new one.  I liked this book and hope you all do too.

In the Shadow of the Fallen Towers: The Seconds, Minutes, Hours, Days, Weeks, Months, and Years after the 9/11 Attacks (ADULT GRAPHIC NOVEL) 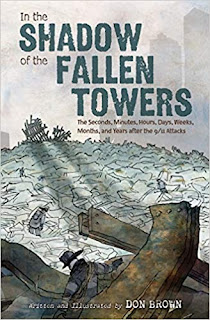 This is a amazing book with mind blowing images.  It tells the true story of 9/11 and beyond in a way you have probably never expected.  Not just the story but with pictures you might forget aren't real photographs once you get sucked into the retelling of that day.  Also if you are old enough beware of the emotions this book will stir or bring back to the forefront of your mind.   This book is not for young children despite being a graphic novel, this one is definitely for adults and teens.  But it keeps the event alive so we will never forget. 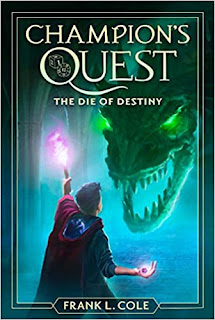 Lucas' life is about to change just not exactly in the way he thought.  When he entered that game shop he was hoping to ditch his friend and run away from their newest foster home in a line of them.  But what happened was he, his friend, a girl from school, and his foster parents daughter who Lucas is sure hates him get transported into a role playing game and now must fight, think, and work together so they can complete the quest if they want to leave the game.  Sounds easy right?

This is a great book especially with the different role playing games making a comeback.  It shows how with teamwork you can accomplish a lot more than by yourself.  The best part is they couldn't just give up and say its to hard they had to keep going or they would be stuck in the game forever.  I think this will hold the attention of readers young and old and I hope they like it as much as I did.

Posted by Trishap at 7:33 AM No comments:

Paola Santiago and the Forest of Nightmares (MG) 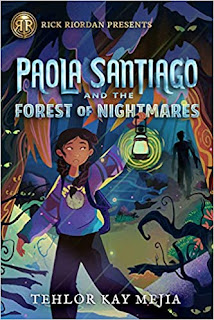 Paola doesn't understand why Dante won't talk to her, Emma is to busy with her new friends, and even her mom is busy with a new boyfriend, so there is no one to talk too about her new nightmares that are coming almost every night.  What is worse in the middle of her nightmares about this creepy forest is her dad who she has not seen since she was six.  But when Dante's abuela falls ill and the doctors are stumped Paola knows what she must do with or without her friends, she must find and face that forest and see what her dad is trying to tell her.

This is a awesome second book to the series and has even more action and suspense than the first book.  The story and its addition of the Latino culture really makes this a refreshing read one any age will love.  I think this would also be great for a reluctant reader.