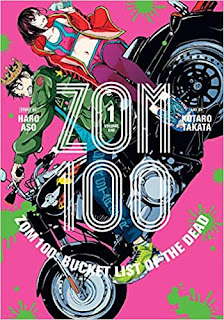 Akira gets his dream job until the end of day one when he finds out it is not a 9-5 job but he must stay for days on end.  He grows to hate his job but also doesn't leave it because he knows his friends still stuck there will have to do his work as well.  But then one day he is confronted with zombies as he goes to talk to his landlord.  Now he doesn't have to go to work, he can clean his apartment, watch tv, and do all the things he has been dreaming about, which is what prompts him to right his bucket list of things to do before he is turned into a zombie himself.

This was a interesting book, it makes you think of all the things you want to do maybe on your days off or before you turn a certain age.  Akira is a wonderful character, one I think most of us would like to be like in this situation.  This is a great manga series that is very different from all other zombie story's that you won't want to miss. 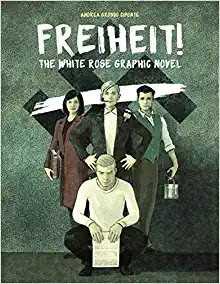 This is a profound and enlightening graphic novel that is about a group university students that used pamphlets to tell people what the Nazis were really doing and to wake people up and hopefully resist against the regime.  They knew they were at risk doing this but they did not care and ultimately died for their beliefs.  However, their work was carried on by many throughout the war.

This is such a wonderful book and it keeps this group and their vision alive still today.  They taught us not to follow our government blindly that they to can cause hurt that is not necessary to anyone involved, but they might also do things to keep us safe even though many people might hate the intrusion.  The point is do the work and know what is being done on your behalf. 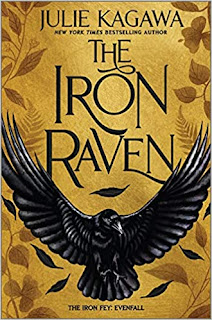 If you are familiar with the series this book is from Puck's point of view, if your not familiar, yes, it is the same Puck from A Midsummers Night's Dream.  With this is a spin off of the Iron Fey series you don't have to have read those first.  This is another hit book from Author Julie Kagawa so don't miss out.

The Muslim Prince: What if Diana Hadn't Died? (ADULT AUDIO) 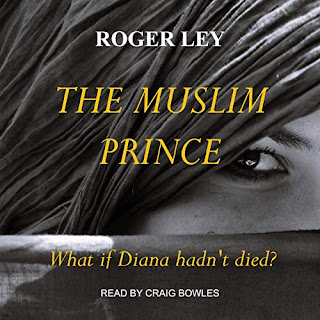 What would have happened to William and Harry if Diana had not died?  What would happen to their children?  This is a alternate reality book that takes the reader through a period where Diana doesn't die but becomes Muslim, and is reinstated back into the royal family as a queen mother when Elizabeth dies.  Even though it is set in a period with Diana it is more about the grandchild's rise to king hood and who is he going to marry.
This is a wonderful novella, well thought out and planned.  I love the turns it takes and all the back stage type agreements that is part of the British monarchy culture.  The voice actor Craig Bowles makes the audio wonderful, and transports you to their world or reality.  His voices for the different characters are simply lovely.  So whether you get the book or audio I think you are really going to like this book. 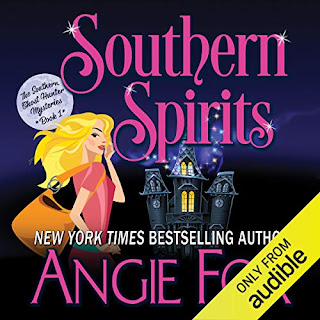 Verity makes one huge mistake as she is about to lose her family house, she dumps out a vase and waters in the dirt into her roses.  Only it was not a vase but a urn of a long dead gangster who is not happy because he is now trapped on her property or with her if she takes the urn.  Now they have teamed up to save her house so she has time to get his ashes back in the urn.  When her jerk of ex's brother offers her a job she can't refuse and will save the house for good, she learns their is much more to spirits than she ever though.

This is a great and fun book, filled with action and suspense, this is just a awesome audio/book.  Narrator Tavia Gilbert brings this book to life and you will feel as if you are there with Verity and Franky.  I hope I get the chance to review more in this series as I truly found this book a joy.  Oh did I mention there is a skunk too.

Finlay Donovan is Killing It (ADULT) 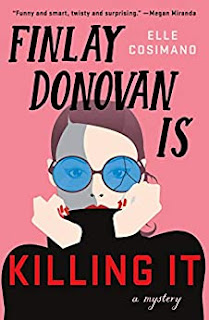 Finlay Donovan brings the title single working mom to a whole new level.  Finlay is a author but her book just isn't writing itself and the advance she got for it is gone.  She is behind on her bills and when a woman sees some very innocent things in her purse/diaperbag she thinks more of it and slips Finlay a note to call her.  The proposition is that the woman will pay nicely if Finlay will kill and dispose of her husband, who is not a nice man.  Things just get more funny as it spirals from there, did I tell you Finlay's sister is a police officer.

This is truly a book that should not be missed it has action, suspense, and loads of humor.  The characters are believable and fun, even the ex husband.  This book will keep you up past your bedtime it will have you so hooked so don't miss out. 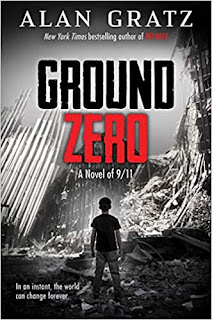 In 2001 Brandon is with his dad at work after getting into trouble at school, they are in the World Trade Center on the 107th floor.  During a lull Brandon sneaks of to buy his friend a new toy to replace the one that got broken in the school incident.  When the tower is rocked and Brandon is seperated from his only parent and teammate.

In 2019 Reshmina has only known war.  Her village sees it all first hand and her brother want to become a Taliban fighter, to avenge their dead sister who was killed on her wedding day.

This book alternates between the two main character and their views on what is happening 18 years apart but brought on by the one act.  This book is full of action and suspense, but is a important story not to forget but told in a way that tweens will understand.  Alan Gratz has a way of taking some of the hard events in our history and bringing them out for our young readers.  He tells it the way it happens but doesn't glorify war nor sugar coat why it happened.  I personally thank him for that, war is not a wonderful thing to be taken lightly and he doesn't.  This is a great book for tweens that were not alive in 2001.