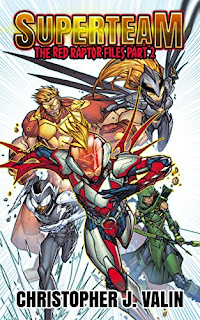 Sawyer, AKA Red Raptor is fed up with the guild rules and decides he will just start his own team to fight crime in the city, and let the super chips fall where they may.  And while that doesn't exactly goes as well as planned, it could have been much worse, I mean heck the world could have been taken over or something.  In the mean time Sawyer's mom and recently found biological dad have decided he needs to get a job and his dad knows just the spot, one of his burger joints, close to their apartment building.
I  am going to leave the description there before I give to much away, I will just say that the Red Raptor is no Spider-Man and when you get to a certain part of the book you will totally understand that statement as you are laughing and cheering him on.  It is for this reason I love this series, the sidekicks are doing a very serious job but some times the way they go about it is very in orthodox and very humorous.  This was a great sequel to Sidekick, And I hope there are more Red Raptor stories to come.
Posted by Trishap at 1:00 AM