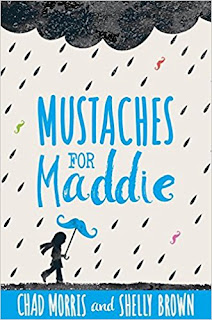 Maddie is your typical twelve year old, she has worked hard to make it into the in crowd of girls at school, she has a boy she likes (but would never tell him), and she likes to make people laugh especially with her stick on mustaches (she always has several in her pocket for occasions).  But when class queen Cassie's bossiness, turns to bullying over who is to try out for what roll in the class play, Maddie just hopes she can be forgiven and still stay in the inner circle.  At the same time Maddie's arm has been bugging her and her mom takes her to the doctor only to find out that a serious surgery is in the cards and her play performance is out, but Cassie can even make that turn worse than it is as well.
I put off reading this book when it was first offered as I thought it would be depressing (mostly due to what I was going through at the time).  After several people assured it me it wasn't I dove in. Even though I had tears leaking out through most of the book it was very inspiration, and if this child could do this so can I, I just need to find some mustaches and lots of them.  I want to thank those two people who talked me into reading this book, you know who your are.  It was a awesome to see Maddie transform and see what was really important to her in life, not the in crowd, but true friends the ones that are there for her and would stand by her, no matter what.  To even see Maddie's brothers change and transform and pick what was really important to them, not the superficial things but the real things, the deep down things.  Maybe those mustaches turned into butterfly's at some point.
Posted by Trishap at 1:00 AM