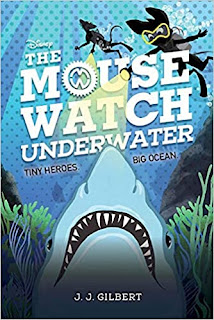 Move over Rescue Rangers, Bernie, Jarvis and the mouse watch are here.  While the rest of the watch are called away to a big emergency, Bernie and Jarvis are stuck doing menial stuff until a message comes through about the SS Moon, a old submarine that was sunk, that had some awesome tech called the Milk Saucer that the mice want back very badly, and the only ones left for the job are Bernie and Jarvis.  Can the two friends overcome their fears to save the milk saucer?

These books are so much fun with all their adventures, and cool tech down to Jarvis' special hoodie.  The book is very exciting with fast paced action from cover to cover.  Not to mention the suspense that will hold you captive until rescued by the ending of the book.  This is a great book for even the reluctant of readers as well as a classroom read as the plot and cliff hangers will hold anyone's attention.  No matter where you read it this is a great book that you won't want to miss.