The Last Human A Novel (ADULT) 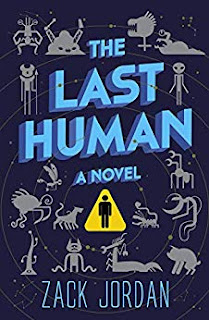 Sayra isn't the most scary creature on her space station, Watertower. She just wants to be treated better than her current status, which isn't much higher than a laundry hamper, all the while keeping her real identity a secret.  But on a field trip she meets someone like her and that is when things go wrong, her mother is killed fighting for her and a rogue space suit grabs her and takes her on board a spaceship with a ragtag crew fleeing the now exploding Watertower.
This is a good book full of twists, suspense and action.  This is also a very philosophical book at times.  It takes a long look at the human race and how it believes humans would act in certain circumstances.   It is one reaction I suppose, but the writing was good and I enjoyed the book..