Atticus Crayle: The Accidental Spy (YA) 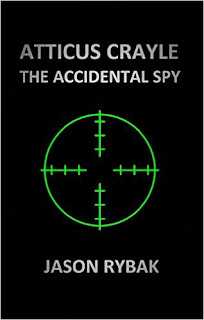 Atticus isn't your typical teenager by far.  Technically he shares a house with his mom (whenever she shows up) and has his chemistry lab in the attic, where he likes to make thing that go boom!  After some trouble, Atticus finds himself going on winter holiday (with a girl he likes) Gemma and her Uncle, Damon, but it will be a holiday like none Atticus has ever had before.
This was a really good book by author Jason Rybak, and the first in the series.  It has non-stop action, tons of suspense, and teenagers beating up on adults, what more could you ask for?  Oh and if your from the U.S. you can have fun with all the British sayings and spellings.  But I think you'll be so wrapped up in what Gemma and Atticus are doing you'll just love the book as much as I did.  the good part is it is only 99 cents, the bad part is it is only available as a ebook so far.