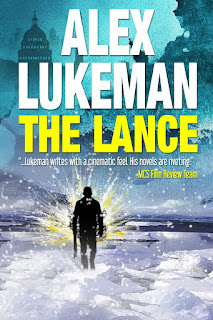 Another wonderful book by Alex Lukeman.  The Lance is about the lance that pierced Christs side while he was on the cross being crucified.  This lance is said to have special powers in the occult world and the German SS was big into the occult and a lot of the occult beliefs.  This book revolves around a German high ups son, now living in the USA, trying to bring back some of these old German ways, and of course Nick and Selena are neck deep in all of the this, and trying hard to dig their way out.  The Lance is as action packed and suspenseful as White Jade.  But when listening to the audible version it is all Jack de Golia and his awesome narration that makes it worthwhile.  He is a great narrator and really ads heart and rhythm to the book.