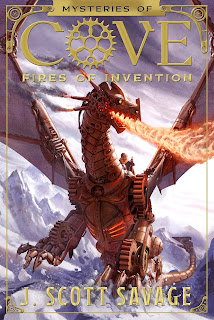 Mysteries of Cove is an awesome new series by Scott Savage.  Fires of Invention is so action packed it is like a steam engine at full speed from the start all the way to the end.  This is such a cool book I would not have guessed from the start anywhere close to what the book was about and that is good because the book was so much better than I ever dreamed.  This book is so much more than a steam punk type book for middle graders, it has twists and turns that make you think.  If you really want to try and figure it out before the end, well good luck.  The characters all come together very well  to pull off everything throughout the book whether it be good or bad, and even some of that can be a surprise.
How would you like living in a world where you can not draw a picture, write a story, make something new, or modify something for the better without risk of being thrown in jail or retraining, as the officials are more likely to call your time with them.  Trenton just couldn't stop building things, and Kallista was driven to find the truth about her father and that brought the two together in a secret so big it could have ended both of their lives as they know it.  But instead, no matter how it turns out,  they end up saving each other.
5 STARS