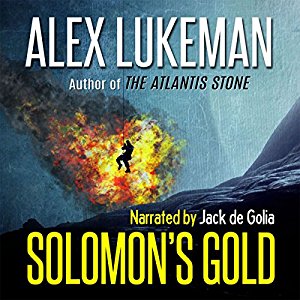 Nick and the team are back, Selena has announced her limited role with the team, right before they all go on a mission, this mission should be a easy one just a in and out translating mission, but we all know how that works for the team, and soon we find the body count rising, and the race is on, but who will get there first?
Alex Lukeman did not slow down the pace any with this the fifteenth book in the series, there is just as much if not more action in this book than the first.  The suspense is just as thick as well, it will have you on the edge of your seat.  If you are lucky enough to have the audio version narrated by Jack de Golia you are really in for a treat.  He has way of making you loose yourself in the book and making you feel like you are a part of the team, there with them on the missions.  Jack de Golia makes each character separate, he is such a talented narrator I will be looking for other books he has narrated.
Posted by Trishap at 1:00 AM