Prehistoric Beasts and Where to Fight Them (ADULT AUDIO) 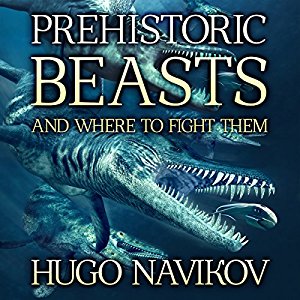 Everyone is on the hunt for gigadon the super huge beast that pretty much killed famed film director Jake Bentneus and who is now offering a one billion dollar prize to the person or team that brings him the head of gigadon, including his own dream team.
Author Navikov has a way with story telling.  The non-stop action, suspense, and twists all were awesomely placed, with the horror sprinkled all around.  The characters are all well defined and play well off of each other and if you have the audio narrated by S W Salzman than you are really in for a treat, as he has voices for each character and Slip Jack's voice is pretty cool.  Salzman can easily suck you into the story like you are on Spit with the team, just by listening, his voice is mesmerizing,  and well worth the audiobook.
Posted by Trishap at 1:00 AM