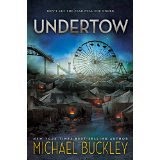 When Lyric Walker's, migraine suffer, and half human and half secret Alfa, school is to be integrated with the Alfa race that has come to America's Coney Island shore, for what purpose no one knows yet, but it is clear they are feared and unwanted by most.  The government has found most of the original 20 Alfa sent and have taken them to a secret camp in the desert to experiment on them and their families.  But the government hasn't found Lyric and her family yet.  But Lyric's new principal knows her secret and if she helps him he will help her get her mom the identification papers they so desperately need to get out of the zone.  But to earn those Lyric must make nice with the Prince of the Alfa, Fathom.
This was another awesome book by Michael Buckley and I am sure it will prove to be another hit series as well.  It is full of non-stop action, and twists and turn, no one is spared.  But the young are the future and can be much more understanding and forgiving despite the diversity thrown at them at times, and that is a point we need to remember now in our own lives.  We should let the children be with others that are different.  Parts of this book reminded me of when the African Americans were integrated into the all white schools and that worked out all right.  So we need to take time to understand people that are different than ourselves because in the end, like this book they found themselves all fighting for the same thing.
The characters whether human or Alfa all acted like typical teens and interacted in their relationships well together.  Lyric, Fathom, Bex were the best.  If everyone could have someone like Lyric and Bex have each other , this world would be so awesome, no one would have a worry.
This book will keep you up way past your bedtime to find out what happens next and you won't regret a single minute of that lost sleep either.
5 STARS﻿